As for many people, it took James more than one attempt to control his drinking.

“It’s 5 o’clock somewhere. That’s how the cliché goes. It’s often used by people who want to justify their drinking or using by following other people’s behaviours. 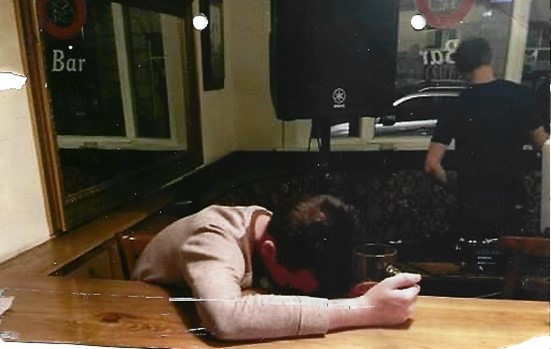 This picture of me was taken by the Landlady of my local pub as a reminder that she did not want to see me in that state at that time of day again. She continued to send me this picture every year or when I had made a fool out of myself.”

The Landlady and staff helped James to realise he had a problem. He tried various drug and alcohol services, but only paid lip service to the programmes, often turning up to sessions drunk or exhausted.

Eventually he lost everything – career, house and partner. After a few years floundering he managed to pull things together and finally went on holiday with his partner to celebrate a month free of alcohol. But all the mental health issues which had been masked by his drinking came to the fore, and James ended up being sectioned for a time.

James went back to spending every penny on drink, and finally his family brought him back to Derby so they could give him more support.

“After a few months I braved it past the pre-contemplation stage and sought some help for my addictive behaviour and I found Aquarius Drug and Alcohol Recovery Service - the rest, as they say, is history.

“Joining Aquarius is the single greatest decision I have made in my recovery journey. I have met people from all walks of life, at all stages of their recovery and have built up a recovery community that supports me daily. I’ve met friends and peers I have every confidence in when I need support, and I am happy to be there for them in turn.”

Taking control of your drinking - and therefore your life - is never easy, but James’ story shows that, with the right help, anything is possible.

Was this page helpful?